i’m not sure that there’s much left to demolish at this point. it’s been totally cleaned out! the contractor tells me that we have the most solid house he’s ever taken apart – no signs of rot or sagging or problems anywhere. one of the reasons the house is holding up so well after 70 years is that (they discovered) a rainscreen made from lathe was built between the stucco and the shiplap boards.

of course, most of the hard work from the builders of yore is being taken apart and chucked in the bin. we have managed to convince the structural engineer to okay keeping the existing douglas fir beam in the basement and some of the fir window headers as well.

here we are looking south into the living room. The fireplace mantel has been taken off the wall temporarily. 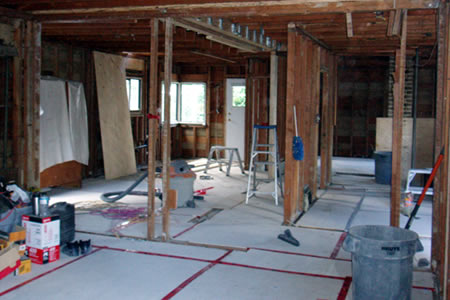 looking towards the master bedroom closet. The existing basement stairwell next to it will be closed in, and some of the floor space added to the closet – the rest will go to expanding the footprint of the kitchen.

beams have been added to replace the load-bearing wall that divided the dining room from the hallway. They’re doubled up because i wanted the beam tucked up into the ceiling instead of hanging below it.

The back stairs and safety railing around the (outside) basement stairs have come off. The second floor addition will project over this porch, so i think they’re adding a new post to the outside corner somewhere around where the ladder is. 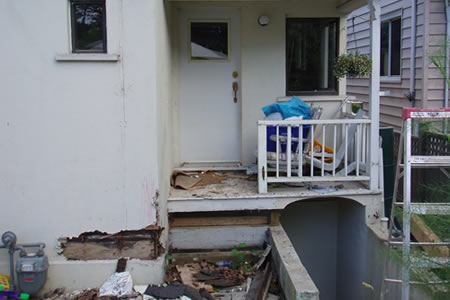 tearing off the roof has been postponed for a few days until the threat of rain lifts. In the meantime, they’re working on new footings for the existing posts in the basement.

we’ve also had some more back-and-forth conversation about how to maintain the slim corner profile between sets of windows. A steel post in each corner would work, but would cost more and require time for fabrication. I think they’re come up with a way to frame it in wood – we just need the engineer to sign off on it.

strawberries are going gangbusters – picked 300 berries this morning, along with some raspberries and green peas.